The Calgary Indigenous Court (CIC) officially opened on September 4, 2019 after 18 months of consultation with Indigenous leaders and stakeholders. Operating weekly, the court will primarily deal with bail and sentencing hearings, concentrating on a restorative justice approach to crime while incorporating Indigenous traditions.

Modelled after a teepee, the courtroom is arranged in a circle, in which judges, victims, offenders, and lawyers sit at the same level so that each party is an equal participant in the judicial process. Four judges with deep ties to First Nations communities preside over the process and include stakeholders, such as Efry, Homefront, Calgary Legal Guidance and Native Counselling Services, to take part in the legal proceedings. Paying homage to Indigenous culture, Alberta Justice provides the option for witnesses to swear their oath with an eagle feather instead of a traditional bible and the courtroom has special ventilation to allow for burning of medicines for special events and ceremony.

Indigenous people are disproportionately represented in both federal and provincial institutions across Canada. Despite only accounting for 4.3% of the total Canadian population, Indigenous adults account for just over 1 in 4 of total admission to provincial and territorial and federal correctional services. Specifically in Alberta, 6.2% of the provincial population is Indigenous, however, current Indigenous incarceration rates in Alberta are unknown as the province has not released this data since 2012. It is the only province in Canada where this information is not publicly available. At the last reporting, Alberta had the most disproportionately high level of Indigenous incarceration and the previous government have acknowledged this overrepresentation.

The CIC is an effort to address these numbers and create alternatives to jail and prison time by implementing recommendations from the Truth and Reconciliation Commission, as well as the Missing and Murdered Indigenous Women and Girls (MMIWG) report. The colonial justice system and Criminal Code itself have not adequately managed crime involving Indigenous people and as a colonial system has not honoured the Indigenous traditions of reconciliation and restorative justice. Judge Eugene Creighton, the provincial court judge that presided over the opening ceremony, discussed the Blackfoot language saying, “We don’t have a word for crime. Our word is mistake.”

With a focus on cultural supports, peacemaking and joining Indigenous clients with the appropriate resources, including Elders, the CIC’s primary goal is restorative justice, rather than punitive justice. Justice Minister Doug Schweitzer stated that the UCP government supports different types of court models. Schweitzer elaborated, “Simply locking people up and throwing away the key is not the path forward, we have to make sure we’re innovative. What’s hurting people, how do we get those issues resolved?” By connecting Indigenous people in vulnerable situations with their community and culture, they find a space where they feel like they belong and the possibility of relapse becomes less likely.

Indigenous women are dramatically over-represented within Canada’s criminal justice system and there is little public awareness on the complex and dynamic factors underlying their criminalization. The teachings of the Medicine Wheel have been used by Indigenous people for centuries as a guiding tool for learning and healing. The four directions of the Medicine Wheel represent an individual’s mental, physical, emotional and spiritual wellbeing. Contained within the wheel, the circle symbolises how health is holistic and cyclical, with each factor influencing one another.

The Medicine Wheel as a holistic health model recognizes the unique circumstances that incarcerated women face and the interconnectedness of these detriments as they impact successful reintegration back into society. Engagement with the Medicine Wheel teachings also encourages women to reconnect with their culture and contributes to their understanding of themselves.

The process of the Medicine Wheel begins as a collaborative conversation where individuals assess the four components of their wellbeing by rating their level of achievement on a scale from 5 to 1, ranging from “Struggling, Ready to Learn, Learning, Practicing to Achieving.” Individuals strive to reach the inner part of the wheel in each quadrant to achieve an ideal level of success. In addition, achieving balance in all four areas of the Medicine Wheel contributes to personal balance in all areas of one’s life. Balance is an ongoing process through life.

The Medicine Wheel breaks down the emotional, physical, mental and spiritual domains by asking individuals to evaluate the strength of their personal relationships, their ability to cope with past trauma, the stability of their living situation, their ability to follow-through with appointments and health check-ups, and their sense of purpose and confidence and connection to their culture, etc.

The use of the Medicine Wheel supports women in identifying the key areas where they want to put a focus on toward healing. EFry Case Managers assist each woman in developing a comprehensive individualized plan that facilitates their personal healing and provides an approach to providing resources and programs.

The Medicine Wheel serves as a cycle of awareness that provides women with direction and knowledge through their recovery. It encourages women to be self-reliant in their self-healing journey as personal experience is central to the goals and objectives that women will set for themselves. As a circular symbol, the Medicine Wheel seeks to break cycles of violence and abuse by tackling each domain of holistic health in order to achieve balance.

Beading on the Path to Healing 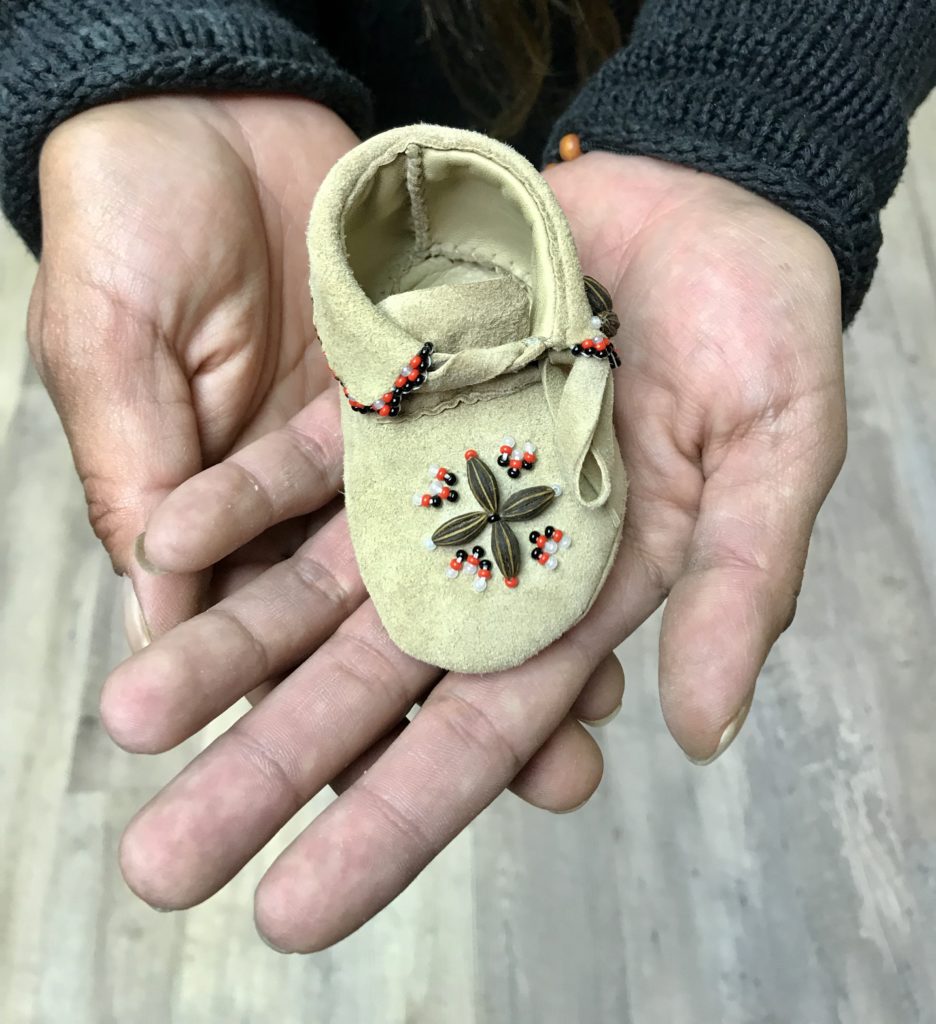 Elizabeth Fry’s Indigenous Program Coordinator, Barbara Smith gently cups a tiny beaded moccasin in her hands adorned with wolf willow seeds. It conjures up memories of her own childhood on the Piikani Nation where her grandmother first introduced her to beading at the age of nine.

Barbara later relocated to Calgary but spent many hours on the Nation with her grandmother where she learned more about their culture.

“All I knew is that I loved this woman,“ recalls Barbara.

Her respect and admiration of her grandmother’s beading piqued her own interest in learning the craft. She apprenticed the skill by learning basic stitches until she established her own unique signature beading style.

That introduction to traditional beading has led Barbara on a long journey of learning and becoming an accomplished and well known skilled beader in her community. Many dancers are wearing Barbara’s work on their regalia on the powwow scene.

Barbara eventually brought her skill to the offices of Elizabeth Fry Society in Calgary where for the past five years she has shared her wisdom and taught hundreds of Indigenous and non-Indigenous women alike how to bead and create cultural crafts including pouches, necklaces and moccasins. The women not only learn how to bead, but learn the history behind the craft and gain cultural pride as they master their own personal skill.

“It can be entrepreneurial,” says Barbara referring to the finished pieces which

are highly prized and valued in both the Indigenous and non-Indigenous community. Yet what is obvious when listening to this proud Piikani woman talk about this tradition is not about commerce, but the healing that occurs when women, many who have experienced significant trauma in their lives, join this group and and find a place of acceptance.

“They build a safe place,” she says. “It’s our community.”

Do you think people should hear more about us to Connect with us and share our stories?

We use cookies on our website to give you the most relevant experience by remembering your preferences and repeat visits. By clicking “Accept”, you consent to the use of ALL the cookies.
Cookie settingsACCEPT
Manage consent

This website uses cookies to improve your experience while you navigate through the website. Out of these, the cookies that are categorized as necessary are stored on your browser as they are essential for the working of basic functionalities of the website. We also use third-party cookies that help us analyze and understand how you use this website. These cookies will be stored in your browser only with your consent. You also have the option to opt-out of these cookies. But opting out of some of these cookies may affect your browsing experience.
Necessary Always Enabled

Any cookies that may not be particularly necessary for the website to function and is used specifically to collect user personal data via analytics, ads, other embedded contents are termed as non-necessary cookies. It is mandatory to procure user consent prior to running these cookies on your website.